CLICK HERE to preview and purchase score and parts. 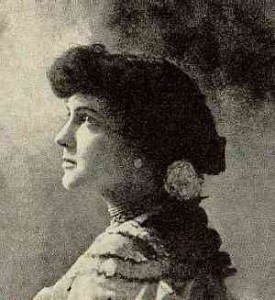 “Amor” is a poem by Delmira Agustini, considered to be the most important female Latin American poet of the early 20th century. She was born in Uruguay and was the daughter of Italian immigrants. She was murdered by her ex-husband at the age of 27.

The poem is in three stanzas and the music follows the form. The instrumental refrain opens the piece, ends the piece, and is performed between stanzas. The instruments play overlapping patterns of different durations that hover around a major 2nd interval of F and E-flat, and simple chords created by these two pitches.

The verses have a rhythmically interlocking pattern between the left hand piano part and the flute. Meanwhile the cello plays a strict serial part of 5 notes and 7 durations, which cause a change in harmony against the piano and flute. The vocal melody fills in the resulting random harmonies, sometimes anticipating the chord change that results from the cello line. The effect is a dreamy kind of randomness, that evokes that mystical period between awake and dreaming.

The right hand part of the piano during the verses, the knocking of the wood of the piano, came to me as an alternative to adding more notes during this section, which I preferred keeping stark, to help bring out the different melodies and resulting harmonies.

This is the first time I have composed vocal music in Spanish, my adopted language which I love.

I dreamt it impetuous, formidable, and ardent;
It spoke the imprecise language of the torrent,
It was a sea overflowing with madness and fire,
Rolling through life like an eternal fountain.

Afterwards, I dreamt it sad like a great setting sun
That faces its head of fire towards the night;
Then it laughed, and in its mouth as tender as a prayer
The soul of the fountain sounded its crystals.

And today I dream that it’s vibrant and tender, laughing, and sad,
That it dresses all the darkness and rainbows;
That, fragile like an idol and eternal like God,
All of its majesty rises above life:
And the burning kiss falls to perfume its soles
In a flower of fire plucked by two …

I Am The Dance

COMING SOON! ONCE there UPON were A two TIME little.. (for Violin, Cello, Clarinet, Bassoon and Bass Trombone)

Would you like to commission me to create a new piece? Awesome!! CLICK HERE to find out more.

I gratefully accept donations of any amount.